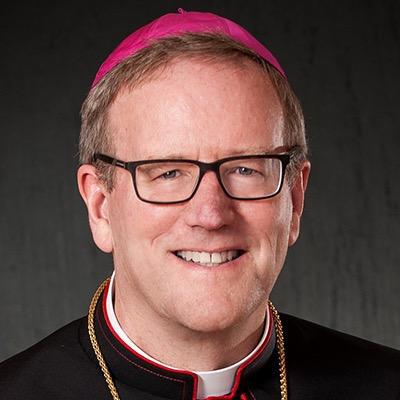 Bishop Robert Barron is the founder of Word on Fire Catholic Ministries and Auxiliary Bishop of the Archdiocese of Los Angeles. He is also the host of CATHOLICISM, a groundbreaking, award-winning documentary about the Catholic Faith, which aired on PBS.

Bishop Barron is a #1 Amazon bestselling author and has published numerous books, essays, and articles on theology and the spiritual life. He is a religion correspondent for NBC and has also appeared on FOX News, CNN, and EWTN.

Bishop Barron’s website, WordOnFire.org, reaches millions of people each year, and he is one of the world’s most followed Catholics on social media. His regular YouTube videos have been viewed over 30 million times and he has over 1.5 million followers on Facebook.

Bishop Barron has been invited to speak about religion at the headquarters of both Facebook and Google.

He has keynoted many conferences and events all over the world, including the 2016 World Youth Day in Kraków and the 2015 World Meeting of Families in Philadelphia, which marked Pope Francis’ historic visit to the United States.

Bishop Barron’s latest film series and study program, CATHOLICISM: The Pivotal Players, debuted in September 2016 and has been syndicated for national television.