The Timing of Christmas

CHALLENGE: “Christians are wrong to celebrate Christmas on December 25.  Jesus could not have been born then—it would have been too cold for the shepherds to keep their flocks outdoors (as described in Luke 2:8).”

DEFENSE: There are several problems with this challenge.

First, the Catholic Church celebrates Jesus’ birth on December 25, but this is a matter of custom rather than doctrine. It is not Church teaching that this is when Jesus was born (note that the matter isn’t even mentioned in the Catechism of the Catholic Church).

While the last was eventually adopted by the Catholic Church for use in its liturgy, the fact that the Church did not declare alternate proposals heretical shows the matter was not considered essential to the Faith.

Third, the proposals that put Jesus’ birth in the colder part of the year (November 18, December 25, January 6, and January 10) are not ruled out by the fact that there were shepherds keeping watch over their flocks at night.

Ancient Jews did not have large indoor spaces for housing sheep. Flocks were kept outdoors during winter in Judaea, as they are elsewhere in the world today, including in places where snow is common (search for “winter sheep care” on the Internet). Sheep are adapted to life outdoors. That’s why they have wool, which keeps body heat in and moisture out.

Sheep are kept outdoors in winter in Israel today: “William Hendricksen quotes a letter dated Jan. 16, 1967, received from the New Testament scholar Harry Mulder, then teaching in Beirut, in which the latter tells of being in Shepherd Field at Bethlehem on the just passed Christmas Eve, and says: “Right near us a few flocks of sheep were nestled. Even the lambs were not lacking. . . . It is therefore definitely not impossible that the Lord Jesus was born in December’” (ibid., §569). 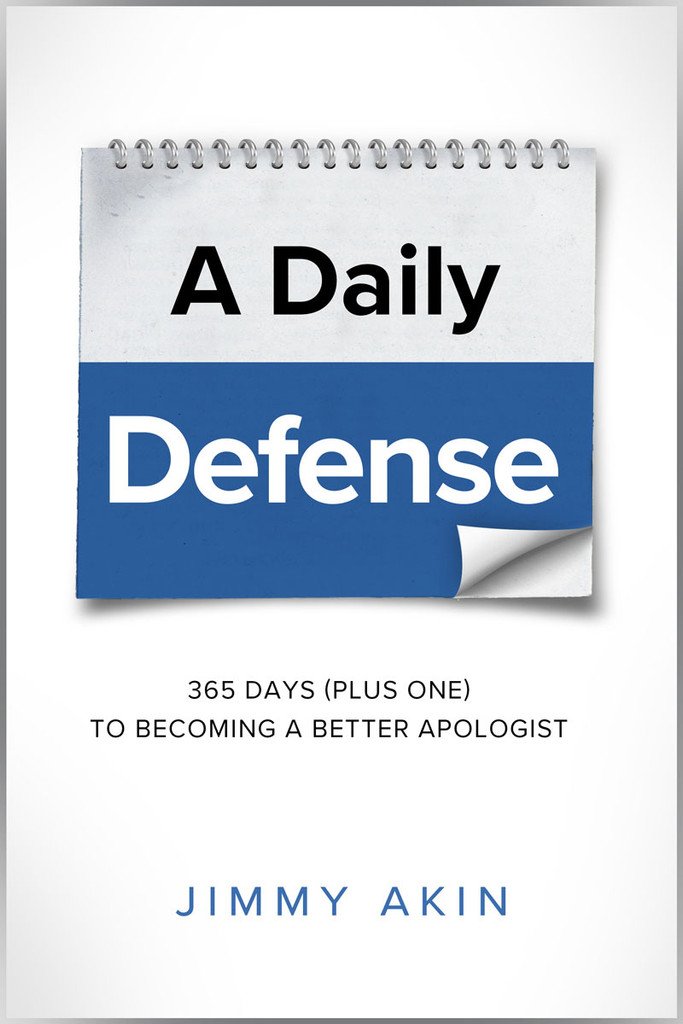 A Daily Defense: 365 Days (Plus One) to Becoming a Better Apologist

Do you want to learn how to defend and explain:

The existence of God…

The reliability of the Bible…

The Real Presence of Christ in the Eucharist…

The authority of the pope and the Church…

and scores of other truths that we Catholics believe— but you don’t have a lot of time?

Don’t worry. Jimmy Akin has done the hard work for you. All you need is five minutes a day.

In A Daily Defense, Jimmy compiles 365 challenges that Catholics often hear from skeptics and non-Catholics—about God, Jesus, Scripture, morality, Mary, history, and a host of doctrines—and teaches you how to answer them. Combining deep learning with decades of experience explaining Catholic belief and practice on a popular level, he cuts to the heart of each subject, offering pithy but powerful replies that are both effective and easy to master.

A Daily Defense is perfect reading before bed or during breakfast, for down time or prayer time, part of a regular routine or picked up on the go. Whatever your day is like, spending just a few minutes in these pages is guaranteed to equip you with the knowledge and skills you need to defend the Catholic Faith.

Jimmy was born in Texas and grew up nominally Protestant, but at age 20 experienced a profound conversion to Christ. Planning on becoming a Protestant pastor or seminary professor, he started an intensive study of the Bible. But the more he immersed himself in Scripture the more he found to support the Catholic faith. Eventually, he entered the Catholic Church. His conversion story, “A Triumph and a Tragedy,” is published in Surprised by Truth. Besides being an author, Jimmy is the Senior Apologist at Catholic Answers, a contributing editor to Catholic Answers Magazine, and a weekly guest on “Catholic Answers Live.”