Miguel Pro is an example of Christian heroism in the twentieth century. The indefatigable Jesuit was martyred by the Mexican government in 1927 for performing his priestly duties.

Born on January 13, 1891, Miguel Pro Juarez was the eldest son of Miguel Pro and Josefa Juarez. His birthplace, the humble central Mexican village of Guadalupe, was especially fitting in view of his intense, lifelong devotion to Our Lady of Guadalupe, Patroness of the Americas.

Miguelito, as his doting family called him, was, from an early age, intensely spiritual and equally intense in his mischievousness. From the time he could speak he had the reputation of being a motor-mouth, frequently exasperating his family with his humor and practical jokes, a trait which remained with him into adulthood.

As a child he had an unbridled precociousness that sometimes went too far, tossing him into near-death accidents and illnesses. On regaining consciousness after one of these episodes, young Miguel opened his eyes and blurted out to his frantic parents, “I want some cocol” (a colloquial term for his favorite sweet bread). Cocol became his nickname, which he would later adopt as a code name during his clandestine priestly ministry.

Pro developed a particularly strong relationship with his older sister, Maria Concepcion, whom he called “Conchita.” Their spiritual bond was a key element in his developing an awareness of his priestly vocation. Most assumed he would follow in his father’s footsteps and become a prominent businessman, but Conchita’s entrance into the cloistered convent (a painful and momentous parting for both of them) galvanized Pro’s thinking in the direction of the priesthood. Although he was vastly popular with the senoritas and had prospects of a lucrative career managing his father’s thriving business concerns, Pro renounced everything for the sake of Christ his King and entered the Jesuit novitiate in El Llano, Michoacan in 1911.

He studied in Mexico until 1914, when a tidal wave of governmental anti-Catholicism crashed down upon Mexico, forcing the novitiate to disband and the order to flee to Los Gatos, California.

In 1915 Pro was sent to a seminary in Spain, where he remained until 1924. By the time he was ordained a priest in Belgium, in 1925, the political situation in Mexico had deteriorated. The presidency had been held by a succession of socialist, bitterly anti-Catholic thugs who tried to exterminate Catholicism. All Catholic churches were closed, and bishops, priests, and religious were rounded up for deportation or imprisonment. Those caught trying to elude capture were shot. Celebration of the sacraments was punishable by imprisonment or death.

Because the Church had been driven underground, Pro received permission from his superiors to return to Mexico incognito and to carry on his ministry undercover. He slipped into Mexico City and immediately began celebrating Mass and distributing the sacraments, often under imminent threat of discovery by a police force charged with the task of ferreting out hidden pockets of Catholicism.

Pro had many narrow escapes. Once, after celebrating Mass in a home, he received just enough warning to be able to slip out a side door before the police surrounded the place. With characteristic bravado, Pro changed into a police inspector’s uniform (one of the many disguises he made use of while eluding authorities) and went back to the very house where the police were busy hunting for him. Swaggering up to the policeman in charge, Pro demanded to know why they hadn’t yet succeeded in capturing “that rascal Pro.” None the wiser, the abashed officer promised to redouble the search efforts.

Another time, Pro was in a taxi being pursued through the streets of Mexico City by several police cars. Ordering the driver to slow down as he rounded a corner, Pro rolled out of the car, lit a cigar, and began strolling arm in arm with an attractive (and startled) young woman. When the police roared by, in hot pursuit of the now Pro-less taxi, they paid no attention to the romantic young couple on the sidewalk.

He became known throughout the city as the undercover priest who would show up in the middle of the night, dressed as a beggar or a street sweeper, to baptize infants, hear confessions, distribute Communion, or perform marriages. Several times, disguised as a policeman, he slipped unnoticed into the police headquarters itself to bring the sacraments to Catholic prisoners before their executions. Using clandestine meeting places, a wardrobe of disguises (including policeman, chauffeur, garage mechanic, farm laborer, and playboy), and coded messages to the underground Catholics who received his notes signed “Cocol,” Pro carried on his priestly work for the Mexican faithful under his care.

Finally he was caught. A car previously owned by his brother had been used in an assassination attempt on General Obregon. The license plate was traced to Pro’s brother, and this led to an informant telling the police where the Pro brothers, who knew nothing about the plot, were lodging. They were put in jail and held without trial for ten days while the government trumped up charges falsely implicating Pro in the assassination attempt. On November 13, 1927 President Calles ordered Pro to be executed, ostensibly for his role in the assassination plot, but in reality for his defiance of the laws banning Catholicism.

When called from his cell, Pro walked to the courtyard, blessed the firing squad, and approached a bullet-scarred adobe wall. He knelt and prayed silently for a few moments. Refusing a blindfold, he stood, faced the firing squad, and held his arms outstretched in the form of a cross, a crucifix in one hand and a rosary in the other. In a clear voice he cried out, “Viva Cristo Rey!”

A volley rang out, and Pro fell to the ground riddled with musket balls. A soldier stepped up and discharged his rifle at point blank range into the priest’s temple. 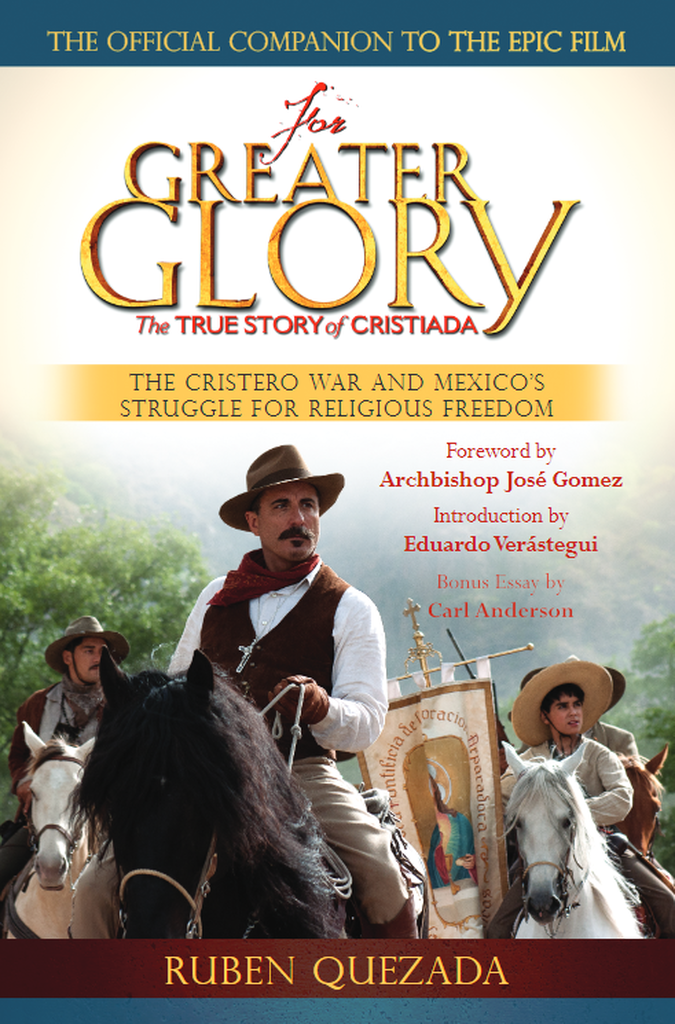 For Greater Glory: The True Story of Cristiada

Many people of faith today are asking “What is the price of religious liberty?” In the 1920s many Catholics in Mexico answered this crucial question at the cost of their very lives. The new major motion picture, For Greater Glory: The True Story of Cristiada tells the epic tale of Mexico’s heroic struggle for religious freedom in a little-known conflict called the Cristero War – but many questions still remain. Now you’ll go much deeper into the exciting history behind the movie with this fact-filled companion book – and gain important insight into the on-going fight for religious freedom today. 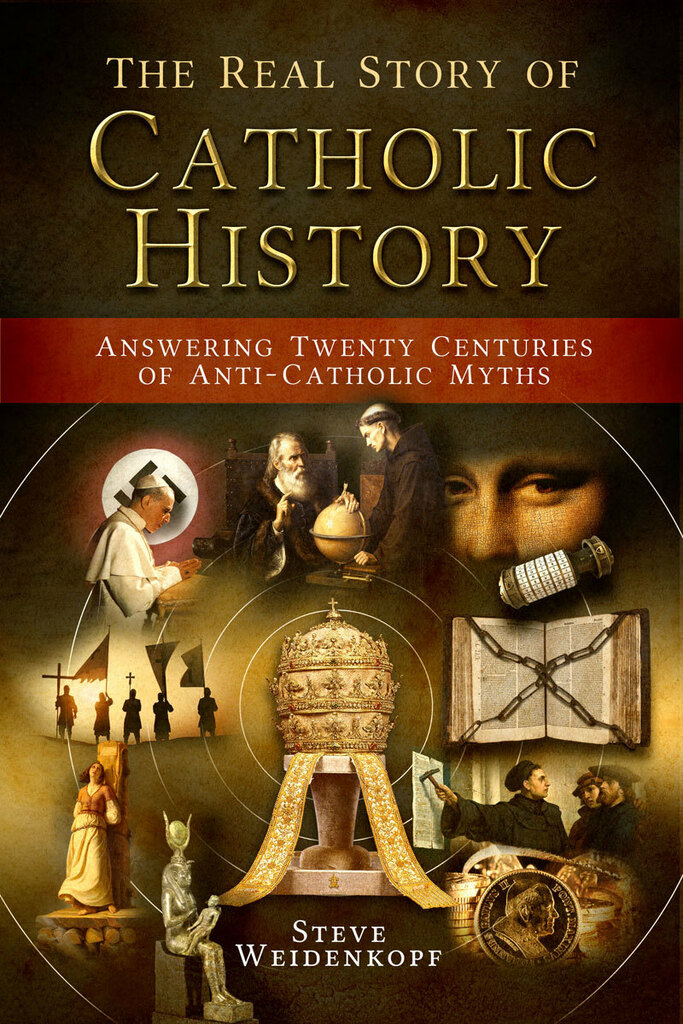 The Real Story of Catholic History

Anti-Catholics like to paint Church teachings in a way that makes them seem vain, backward, or superstitious, all in the hope of drawing people out of the Faith and into sects or unbelief. Catholic apologists fight back with facts and sound arguments.

But there’s another area where the Church’s enemies tell their own false story of Catholicism: its history.

Whether it’s from the media, in classrooms, or out of the mouths of pastors and politicians, we’ve all heard a version of Catholic history filled with unrelenting violence, ignorance, worldliness, and bigotry. It’s enough to make many believers question whether the Church truly was founded by Christ!

This kind of attack requires no less of a response from those who know the truth. In The Real Story of Catholic History, Steve Weidenkopf gives it to you.

Weidenkopf (The Glory of the Crusades) collects over fifty of the most common and dangerous lies about Catholic history and, drawing on his experience as a historian and apologist, shows how to answer them simply and powerfully. Whether it’s claims about Catholicism’s supposedly pagan origins, old myths about Galileo or the Inquisition that never seem to go away, or more modern misconceptions that anti-Catholics cynically exploit, The Real Story provides the desperately needed corrective.

Packed with research and diligent in pursuit of the truth, while never whitewashing or explaining away the Church’s past faults when they’re found, The Real Story of Catholic History is an essential resource for every Catholic’s bookshelf.

Patrick Madrid is the author of numerous books and host of the daily “Patrick Madrid Show” on Relevant Radio, broadcast nationally on 200 AM & FM stations and globally on the Relevant Radio app. His show airs live Monday through Friday (8:00-11:00 am CT).

Patrick was raised Catholic and has been a practicing Catholic his entire life. Growing up in Southern California, he was baptized at Saint Mary of the Assumption Catholic Church in Whittier and, for several years, attended the Mission San Juan Capistrano grammar school. He was an altar server for the Mission Parish’s daily Traditional Latin Mass in its historic Serra Chapel.