All Hallows Eve (Halloween) in the Traditional, Pre-1955 Liturgical Books 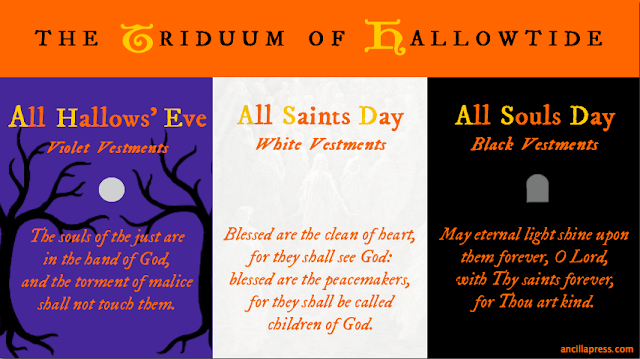 Halloween is a liturgical holiday. Anyone would be forgiven for not knowing that, because almost nobody keeps it that way anymore—to such a degree that some Catholics are of the opinion that we should wash our hands of the whole business. But Halloween has always belonged properly to the Church, and as such it should be made a key strategic objective in a cultural Reconquista. To help illustrate why, I’d like to walk through the day of October 31st, not as the world celebrates it now, but as the Latin Church celebrated it for centuries, listed in the Martyrology as Vigilia omnium Sanctorum.

The Thirty-first of October would traditionally have begun with the office of Matins before sunrise. Traditionally, weekdays in October Matins featured readings from the Books of Maccabees. But on the 31st, the readings switch to Luke 6 and Ambrose’s homily on the Beatitudes. These lessons appointed for Halloween come from the common “Of Many Martyrs”, and we will see this theme of the Beatitudes reappear not only later in the vigil day but also in the feast of All Saints to follow. 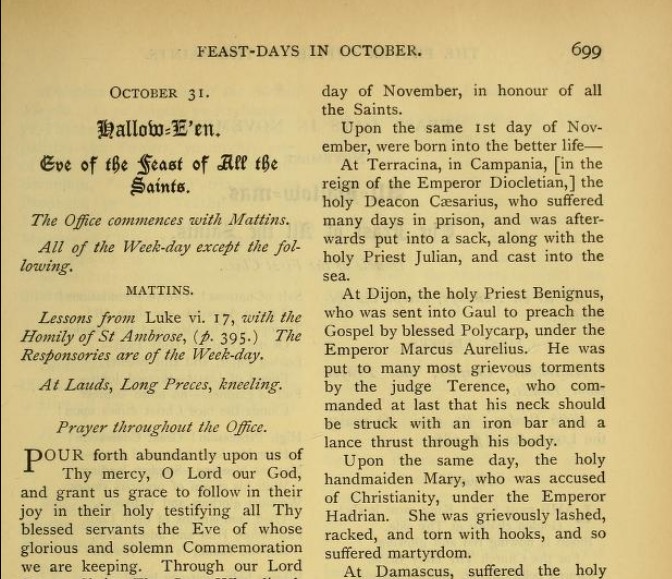 Above: The Office of Halloween, from the translation of the Roman Breviary by the Marquess of Bute.

The other unique element of the Office for Halloween is the collect, taken from the Mass and referring to the joy of all the saints and the “glorious and solemn commemoration” of the next day. We will return to this collect later, but suffice it to say that we can already see, even before the sun rises on October 31st, and really back to the Martyrology entry read at Prime on the 30th, that the sacred liturgy had set this day aside as something special.

As a vigil, the Mass of Halloween saw the altar and priest vested in penitential violet. It had its own dedicated set of propers and readings. Overall, they anticipate the joy of the subsequent feast, though often with a slightly different twist. The beginning of the Halloween introit, Judicant sancti gentes, et dominantur populis (The Saints judge nations, and rule over people), strikes a more stern, Last-Judgment tone than the purely jubilant All Saints Introit Gaudeamus omnes in Domino (Let us rejoice in the Lord), even though they both end on the same Psalm: Exsultate, justi, in Domino (Rejoice in the Lord, ye just). 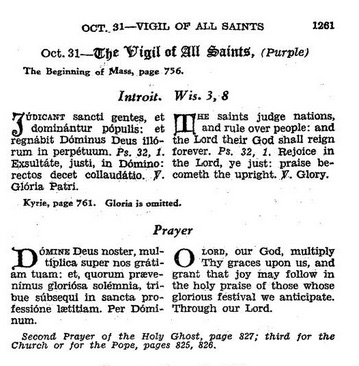 Above: Beginning of the Mass of the Vigil, from the New Roman Missal of Fr. Lasance (1938)

In the Halloween gradual and offertory, note the grammatical tense in exsultabunt and laetabuntur: “The saints shall rejoice in glory, they shall be joyful in their beds”. The future here seems to pull double duty, not only helping to point forward to the next day’s feast, but also inviting a comparison between what the canonized saints enjoy now and what the Christian faithful and the souls in Purgatory will one day attain.

The Halloween Mass marks the dramatic appearance of the Apocalypse (Revelations) in the liturgical readings.  Instead of a Pauline Epistle, we are suddenly confronted with St. John’s spectacular and cryptic imagery: a Lamb with seven horns and seven eyes, harps and choirs, angels circling the throne. It is a startling vision—and it will continue to unfold through the rest of Hallowtide. But only here in the vigil do we see the doctrine of intercessory prayer take such picturesque form as the “golden vials full of odors, which are the prayers of the saints.” The Lesson also presents us with a first taste of universality or Catholicity of the saints—Christ has “redeemed us to God, in Thy blood, out of every tribe, and tongue, and people, and nation,” a theme we will come back to at Vespers. 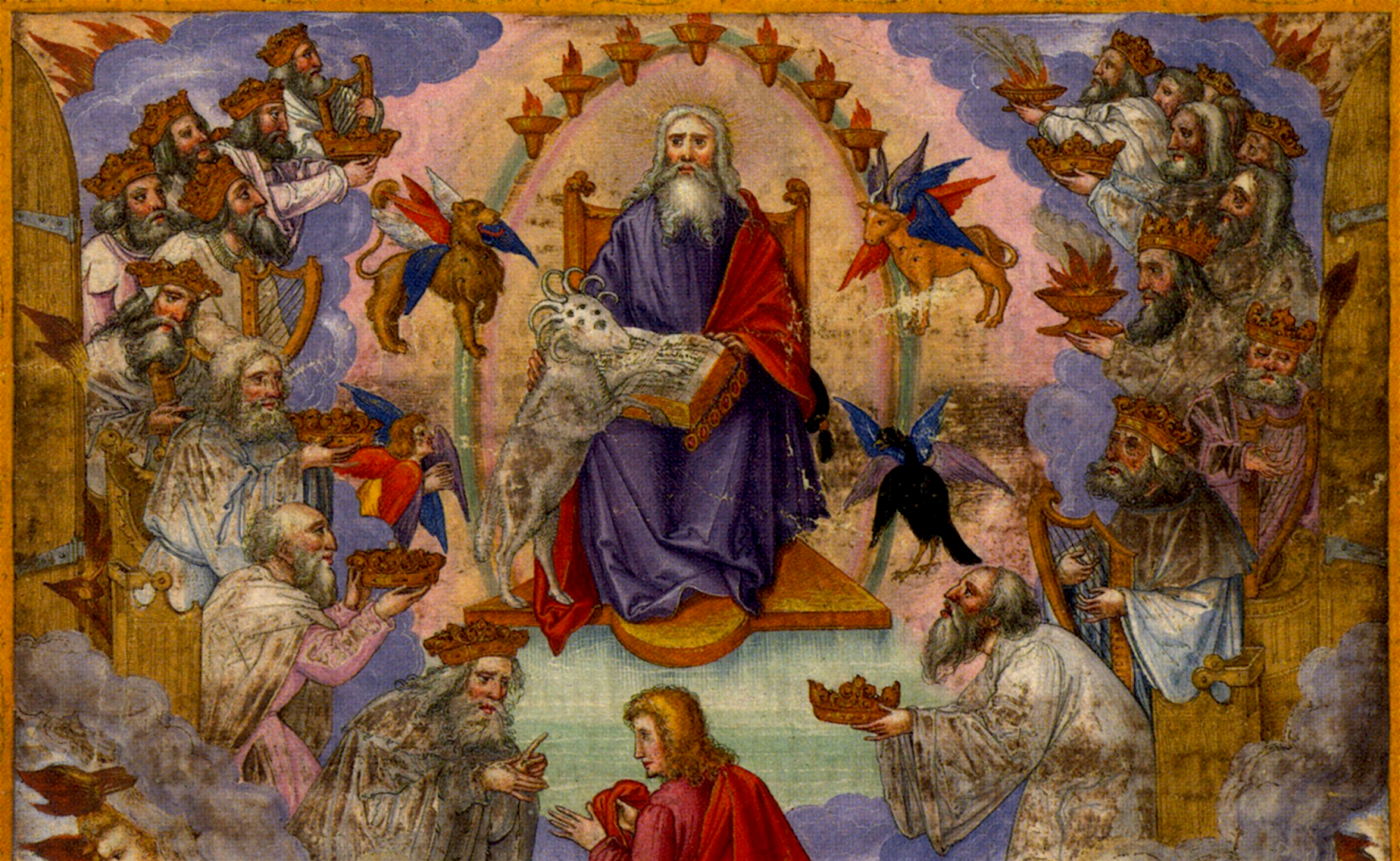 The Gospel of the day, as at Matins, is drawn from Christ’s Sermon on the Plain in Luke 6. It therefore nicely parallels the Gospel of All Saints’ Day, which presents the Sermon on the Mount from Matthew 5. Both texts give us the Beatitudes and point us toward the path to sainthood. But intriguingly, Luke’s Sermon on the Plain also features an exorcism: “And they that were troubled with unclean spirits were cured.” It is not a major theme of the Halloween Mass, to be sure, but its presence here is a well-timed reminder of our enemies in the spiritual battle—then as now. Another subtle hint can be found in the Communion verse Justorum animae, which reminds us that “the torment of malice” shall not touch the just.

This strangely named office is really the Vespers of the Dead—“black” here referring to the color of the vestments. These vespers are not actually found on Halloween day in any of the Church’s official liturgical books. Their true liturgical place is after the Second Vespers of All Saints on November 1st. But I have included this office here since there was a Breton tradition of saying it on the afternoon of vigil—apparently devotionally (for historical references, see here and here). It may well have flourished in other places as well, since Brittany was said to be particularly conservative in its retention of old medieval customs. 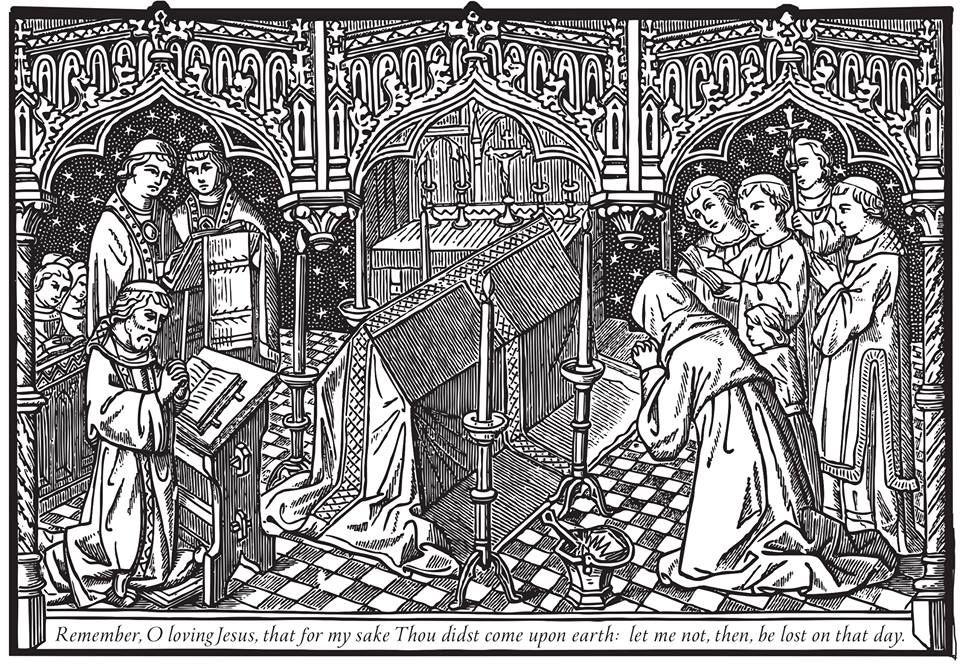 Black Vespers begins with the antiphon ”I will walk before the Lord in the land of the living”—and perhaps here we can see the origin of the idea that on Halloween the departed souls returned to earth. Neopagans have made much of this folk belief, often claiming it to be a lingering vestige of the “old ways”—on slender evidence and overoptimistic assumptions of pagan survival. This antiphon seems to offer a much more plausible source and a better explanation for the presence of this belief in disparate countries.

In places where it was said, Black Vespers infused Halloween with the solemn spirit of All Souls’ Day—and reminded Catholics looking toward heaven of their dear departed still suffering in Purgatory. We can very much use this reminder today, particularly as Catholic funerals have too often become deformed into pseudo-canonizations, with the deceased rashly and improperly assumed to be enjoying heaven, with no need of our prayers.

First Vespers of All Saints

Finally, we come to the actual appointed Vespers for October 31st: the First Vespers of All Saints’ Day. In the dimming light of sunset, the Church officially begins its celebration of that great feast, having put aside the penitential violet and the mournful black, and vesting in the exultant glory of white and gold.

Re-echoing the Mass Lesson, its antiphons boldly sweep up all history and all geography into the heavenly ranks: “I beheld, and, lo, a great multitude, which no man could number, of all nations, and kindreds, and people, and tongues, stood before the throne.”; “Thou, O Lord God, hast redeemed us by thy Blood, out of every kindred, and tongue, and people, and nation, and hast made us a kingdom unto our God.”

The Vespers of All Saints is presenting us with a cast of historical and other-worldly characters of every type, arrayed before us in a great colorful pageant. 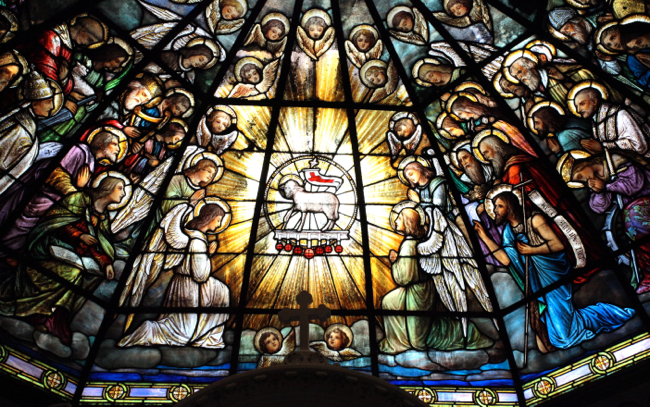 The sequence Placare Christi addresses in each verse the angels, the Apostles, the purpled martyrs, the choir of virgins and confessors. The Antiphon at the Magnificat barely names a class of saints before it runs to the next in sheer delight—“O ye Angels, ye Archangels….O ye Patriarchs and Prophets, ye Holy Teachers of the Law,—O ye Apostles,—O all ye Martyrs of Christ, ye holy Confessors, ye Virgins of the Lord, ye Hermits,—O all ye holy children of God”.

As Vespers came to a close, the lay Catholic of bygone ages retired with all these great themes and concepts fresh in his mind, preparing himself for the festivities of the next day. He would have seen priestly vestments change through the day from penitential violet, to somber black, to white or gold.  And what, today, forms the Halloween color palette? Purple, black, white and orange—matching Church’s liturgy almost perfectly, save for the characteristic hue of the North American Autumn.

This is Halloween as traditionally envisioned by the Church: a colorful pageant where all the nations and even the living and the dead join together to give glory to God.

Regrettably, despite its long history and rich tradition, the Eve of All Saints was one of the vigils completely abolished in 1955. As a result, even traditional Latin Mass parishes, which generally use the 1962 books, do not offer the liturgy that I have described above. The First Vespers of All Saints still remains, of course, even in the 1970 Missal, but the abolition of the vigil has turned the first part of the day into simply another generic “Mass of the Season.” The Triduum and its subsequent octave are no more. Gone too are the liturgical parallels between Halloween, All Saints, and All Souls, with their subtle variations and interwoven themes.

They are vestigially remembered though. Across the globe, the liturgies of Hallowtide had long been imaginatively amplified by folk traditions and customs: souling in the British Isles, Pão-por-Deus in Portugal, Dia de Muertos in Mexico, and Pangangaluwa in the Philippines. Praying for the deceased of the family and of neighbors was a widespread phenomenon. In some areas like Scotland and Ireland, children went guising or masquerading after dark, carrying turnip lanterns and singing or reciting verses for treats.

But the original anchor for all of these customs was the Church’s liturgy. Many of them were already seriously compromised after the Reformation—and in England Halloween customs had even been abolished by law. But when the Church herself pulled up the anchor, nothing could stop the various folk traditions in even Catholic countries from drifting aimlessly.

What can we do? Let us set a good example in our homes first, restoring the liturgical Halloween to our hearts and our hearths. The texts of this wonderful vigil, from both the Mass and the Office, give us some excellent devotions for the day.  If you have an pre-1955 Missal and breviary handy, the prayers are readily available there for you to use. Alternatively, you can access them online using the links above. For convenience I have also compiled them and other devotions in a small booklet soon to be available from Ancilla Press. If nothing else, we would do immense good by taking a few seconds that day, while we prepare for any festivities, to devoutly pray the Collect of All Hallows Eve:

O Lord, our God, multiply Thy graces upon us, and grant that joy may follow in the holy praise of those whose glorious festival we anticipate. Through our Lord Jesus Christ Thy Son, Who liveth and reigneth with Thee, in the unity of the Holy Ghost, one God, world without end. Amen.

Claudio is the founder of Ancilla Press, specializing in seasonal devotionals for Advent, Christmas, and more. He has written and edited numerous popular and scholarly books in linguistics, history, and liturgy, including The Roman Rite in the Algonquian and Iroquoian Missions and the American Martyrology. He also has contributed articles to Latin Mass Magazine, The Remnant, New Liturgical Movement, and Liturgical Arts Journal. He occasionally blogs at Letters from Hoquessing. A native of Philadelphia, he resides in the Pocono Mountains with his wife and children.